5 Things to Czech out in Prague

For years, I wanted to go to Prague. One of my favorite artists, Alphonse Mucha (who designed the window below), is from Prague. Ever since some chick told me about a bunch of great Mucha exhibits she saw in Prague, I've wanted to go there and do that. That made Prague a definite plot point in my trip. Besides, I'd seen pictures. I knew it was an un-bombed masterpiece of a city. Before I ever got there, I knew I was in grave danger of falling in love with the city.

Thanks to a couple of scheduling decisions, I visited Prague in mid September. Now, September is a very nice month in many places. In Prague, September is a cold drizzle that just won't quit. Did I fall in love? No. Will you fall in love? Maybe. Here's a five step guide to enjoying yourself, despite the cold:

1. Bundle up super warm, and look at the buildings at night!

Did I mention that it's cold? There's no denying that the place has a cold beauty. A very cold beauty. Especially at night.

And the art nouveau influences on the buildings are really a great feature of the city. Take some time to wander around aimlessly in the streets and look at the needlessly pretty detail on the faces of the buildings. You won't regret it, unless you hate things that are pretty.


(That particular building, the Municipal House, even has some interior decorating by Mucha. And a huge gift shop of art nouveau stuff.)

2. Bundle up super warm and look at buildings during the day!


Really, there are a ridiculous number of overly ornate buildings.

There's also a castle. Did I mention the castle? Most of it is pretty standard castle. But the cathedral is kind of impressive. And that's where you can find the stained glass Mucha artwork from above.


And there are more nice churches. If you're into that sort of thing. 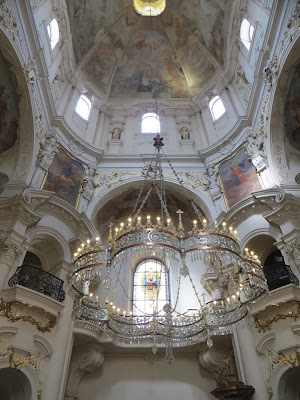 3. Make Fun of the lame, but pretty, Astronomical Clock!

One attraction that is universally panned is the Astronomical Clock.
They say it's on par with the Munich clock. This one seems an even more effective snoozefest. On the bright side, it does have a pretty cool Astrological motif.


4. Listen to Classical Music in a place with great acoustics and pretty!

If you happen to walk by places when performances are about to start, you can get some very cheap tickets. This was the Mirror room, and they played music like Vivaldi four seasons. The sound quality was pretty great. It was civilized. Maybe too civilized.

If you get really tired of the civility and class of the beautiful city, take a short train ride to Kutna Hora, a small town outside of Prague.

Do you ever stop and think to yourself "Hey, self, I wonder what they did with all the bones after everyone died in the plague?" If you went to the Paris Catacombs, you would know that some people developed a femur-stacking hobby. If you make it out to the Sedlec Ostuary, you can see that skeletons are art supplies plus.


The whole chapel has a bare bones approach to interior decorating.