The cowboys had it right. They were free agents with nothing more to weigh them down than a gun and a (possibly stolen) horse. They weren't burdened with consumerist culture and the accumulations of years of acquisitive tendencies. None of this schizoid postmodern existence. Just the sun on their faces, potentially fatal dehydration, bullets every which way, and the quiet of nature.

Ignoring the deconstructive readings that problematize the lone gunman fantasy with criticisms of the marginalized and mistreated Native Americans, gender politics, general race relations, and the fallout of shootouts and casual mayhem -- the cowboys had it right.

It would be great to go west, where there are no rules. To discover the great untamed land. Walk out of the society that would rather have them working in a store for an honest living. It's an escapist fantasy for people droning in jobs they hate. I can relate. It's all Man vs. Society. Man eats, shoots, and leaves.

But generations swing like pendulums. Once the tv channels were full of cowboys. Now they're full of cop shows, which tend towards the other side of law and order. But as long as cynicism and darkness are in (see the popularity of the super successful Batman reboot, the popularity of Dexter) the outsiders can do their thing, just in different clothes. Cowboys can't come back in a big way; too many cheesy shows and movies have come and gone.

After all, the wild west is gone. But unexplored territory isn't.

Now it's time for the wild web?
Posted by Kat Zantow at 12:23 AM No comments: Links to this post

Email ThisBlogThis!Share to TwitterShare to FacebookShare to Pinterest
Labels: A face all planes and angles, it's not subjective if I'm right, oldschool art, True Grit in the Blood, very excellent artwork

Not only is the Slice of Life the boat Dexter uses to dump bodies, but it's also a lame narrative and theatrical technique. It aims to be naturalistic, (anti-plot and in favor of almost randomized events from the characters' life).

Slice of my evening:
Read some of Neil Gaiman's Sandman series. Toasted almonds over a wood stove. Pet the cat. Tried to find a tutorial on how to make a Photoshop tutorial, but it must've been too meta. Hunted stink bugs with a flashlight and drowned them. Ate delicious tilapia soup.  Looked at some interesting illustration style doodles. Bought the domain katzantow.com for a dollar (don't bother checking it out until I say so because it is good and empty). Still excited over getting 3rd place in that fantasy short story contest (I'll post up links to the story whenever they get the pdf version up). Then I felt guilty over being behind schedule and sat down to write an article for the Canary Review. And then to an hour of working on the Shadowing sequel...
Posted by Kat Zantow at 10:55 PM No comments: Links to this post

Email ThisBlogThis!Share to TwitterShare to FacebookShare to Pinterest
Labels: 11 11 11, future-trippin, shameless self promotion, slice of life, writers are boring

Fun fact: I like painting trees.
Both of these were commissioned for the same friend who wants a collection of Yggdrasil. The first was supposed to be a tree of life. It may or may not look like a tree of death.
The next time a tree was commissioned for her, it was requested with the wolf and ivy for secret symbolic reasons that you would never guess in a million years.

Right now I want to paint trees all the time. It's autumn, and the leaves are almost all gone, so I miss the foliage. At the moment is a beautiful sliver of time for autumn yellows in late sunlight. And our Japanese Maple is a brilliant blood red for just a few days. I doubt I can paint the thing fast enough before it vanishes, but it may be time for another painting.
Posted by Kat Zantow at 1:17 AM No comments: Links to this post

Tiger Giveaway: We have a winner! 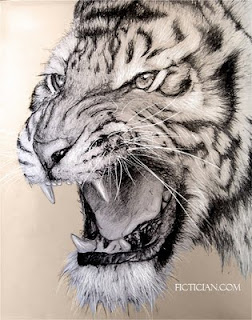 And the winner to this much anticipated art print & ebook giveaway results (drawn from The Hat (free program) and Rafflecopter (powered by Random) is...

Congratulations to Naiya, whose walls will soon have a certain cache of rage and fury embodied in this lovely print, and whose eReader/laptop/phone will soon have a copy of Shadowing, the first book of Moonblind.
Posted by Kat Zantow at 12:00 AM No comments: Links to this post

Email ThisBlogThis!Share to TwitterShare to FacebookShare to Pinterest
Labels: free ebook, giveaway, I'd like to read it on Kindle, Moonblind, there can be only one, tiger

Flashback to last week: I failed to update anything because I was on vacation, exploring North and South Carolina. In the North we saw a monument to the One Percent of old. In the South, the streets were overrun with protesters.

Now, I'm going to go out on a limb and postulate that only members of the 99% are reading this blog. If you are in the top 1% and you're reading my blog for fun, you should probably consider becoming a patron of the arts. Artists with grants turn out work much faster.

But even if you are in the top 1%, you've got nothing on the old Robber barons. Namely Vanderbilt. This, The Biltmore, was his house:

So we toured the Biltmore (located near Asheville, aka Beertown USA 2-3 years in a row). This tour was no small thing. In fact, the house is the largest private residence in the US. It's big. At 2,000,000 square feet, containing roughly 500 rooms, of which 43 are bathrooms (only one was visible on the tour). The banquet hall really should count as a multiple rooms, because it's seven stories high and could swallow certain presidential homes with room to spare.

This is the .00001%. Didn't see any protesters, though. But the house is so fancy that its influence spreads out into the places it touches in town. Even the neighboring McDonald's has vaulted ceilings and a grand piano. It was rumored to be Vanderbilt's favorite eating establishment. All in all it was enjoyable, and an insane display of wealth from another age. My biggest regret is that I didn't approach visiting the house with plans for a day of live-action clue.

But further into the city, Asheville became more fun with its own unique flavor. It was full of hippies, headshops, beer, chocolate, and art galleries. The art galleries were fun, cocolate cookies delicious, and the Expresso Stout even lived up to the storeperson's claims of being "only the best thing ever." In one of the art places, I came very close to buying a tiny tophat, but I realized I need to make sure my fashion choices do not significantly overlap with Helena Bonham Carter.

Now back in the cold winter of Virginia, and frozen hands. Hobo gloves are going to be a fashion staple this month for NaNoWriMo.


Posted by Kat Zantow at 1:21 AM No comments: Links to this post

Update that maybe should have been posted yesterday


I am back from my long absence of a week. Excuses to commence below other points of interest:

Dear internet. Do please forgive me. It was an absence, but I had my reasons to totally fail at updating for a week. I went on a vacation with my parents, down Virginia, and through North and South Carolina. Through a confluence of events, we ended camping in a haunted, abandoned house which for some reason had no wifi.

Stay tuned for an adventure tale of travel to be posted this Thursday!

Posted by Kat Zantow at 4:45 PM No comments: Links to this post